On April 15, 1947, Jackie Robinson became the first African American to play Major League Baseball in the modern era. He would later become the first African American named a vice president at a fortune 500 company; serve as an advisor to politicians; start a bank and a housing development company; and, was a key figure in advancing equal opportunity and first-class citizenship for all Americans during the Civil Rights Movement of the 1950s and 60s. Hailed a “..freedom rider before freedom rides,” Robinson’s name has become synonymous with breaking barriers. 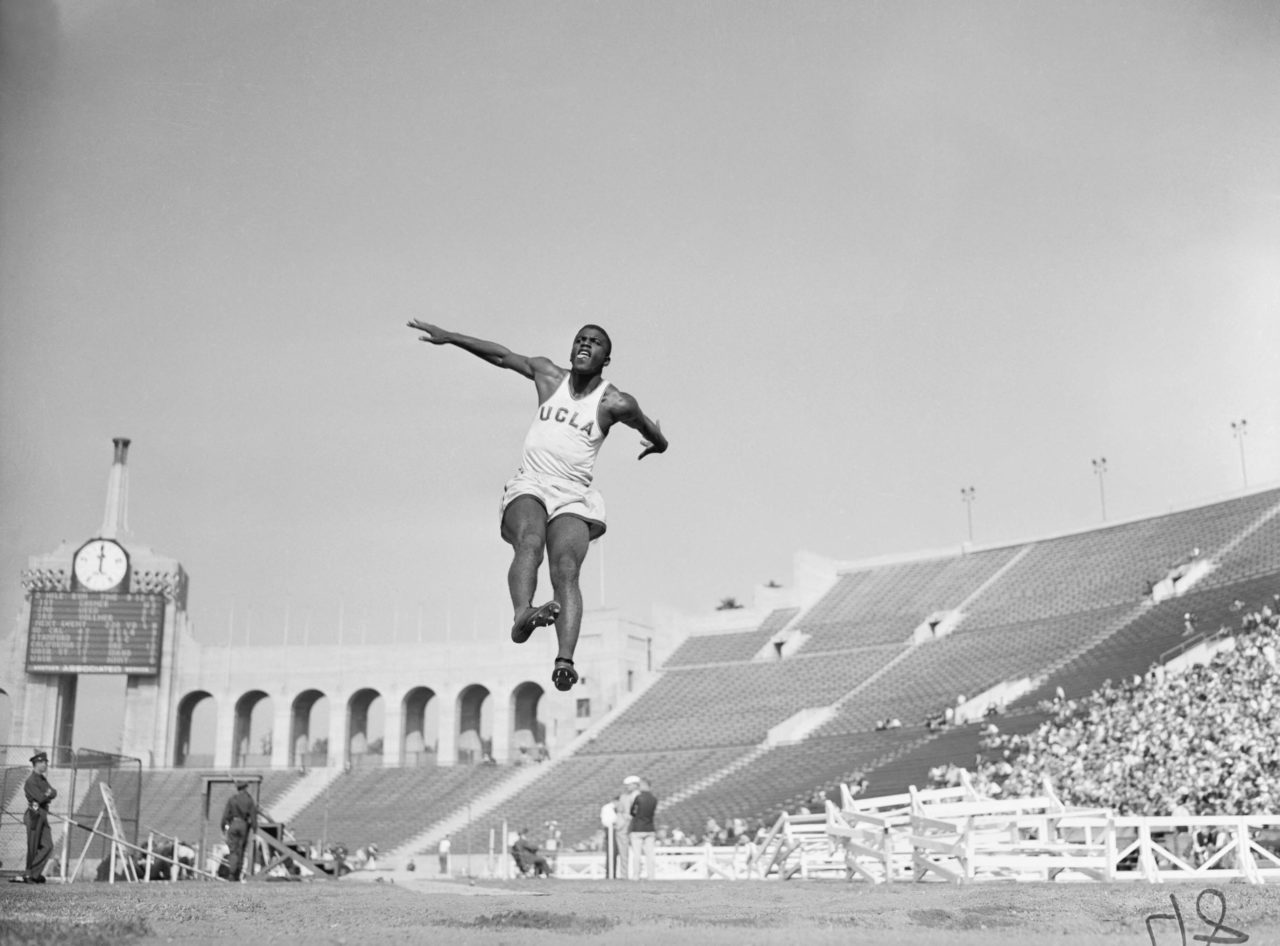 Early Life and Gateway into Sports

Jackie Robinson was born on January 31, 1919, in Cairo, Georgia, the son of a sharecropper and the grandson of former slaves. Young Jackie grew up in Pasadena, California, raised by a single working mother of five. After graduating from Pasadena Junior College, Jackie attended the University of California Los Angeles. A star athlete, Jackie became the university's first four-sport letter winner, excelling in football, basketball, track and field, and baseball. After leaving UCLA, he served in the U.S. Army during World War II, but was court marshalled and honorably discharged for standing up for his rights and refusing to move to the back of a segregated military bus.

In 1944, upon returning home from the military, Jackie Robinson set his sights on joining baseball's Negro Leagues and began playing shortstop for the Kansas City Monarchs. In 1945, opportunity beckoned when Branch Rickey, the general manager of the Brooklyn Dodgers, invited Robinson to become the first African American to play with the all-white Dodgers' farm team, the Montreal Royals. Anticipating the great adversity that Robinson would face as he integrated modern baseball, Rickey professed he needed a player who could bear the torment, famously telling Robinson he was "looking for a ballplayer with guts enough not to fight back." 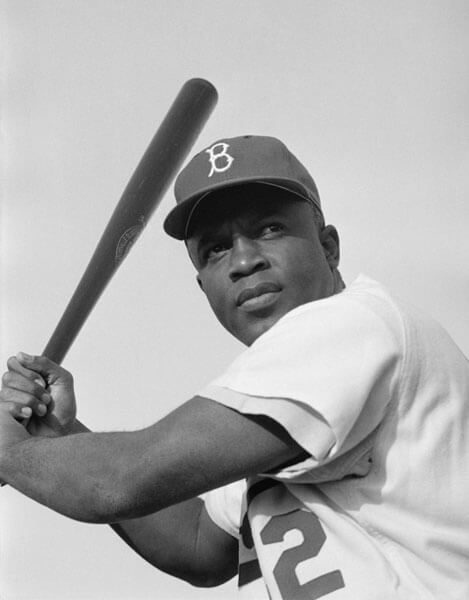 An Unprecedented Career in the Major League

On April 15, 1947, Jackie Robinson stepped onto Ebbets Field for his first game with the Brooklyn Dodgers. It was the beginning of an unparalleled career in baseball. At the end of his explosive nine years as a Dodger, his record included a .311 batting average, 137 home runs, 734 runs batted in, and 197 stolen bases. In 1955, he helped the Dodgers beat the New York Yankees to win their first World Series Championship. Robinson took home the Rookie of the Year Award in 1947, the Most Valuable Player Award in 1949, and in 1962 became the first African American inducted into the Baseball Hall of Fame. The Fight for First Class Citizenship for All

After integrating baseball, Robinson became a full-fledged leader in the Civil Rights movement. He used his celebrity status to further human rights and endeavored to change the landscape of race relations in the United States. Upon retiring from the game in 1957, Robinson was hired to serve as the Vice President for Personnel at Chock Full O’Nuts, the first African American to be named a Vice President of a major American company. He used his position at Chock Full O’ Nuts to improve working conditions for employees.

An active member of the NAACP, Robinson was often a featured speaker at civil rights rallies including the famed March on Washington in 1963, and frequently participated in picket lines. As a nationally syndicated columnist for the New York Post and New York Amsterdam News, Robinson wrote passionately on social issues, sports, and family life, always encouraging people in his community to become active in politics and business.

In 1964, Robinson co-founded Freedom National Bank of Harlem, a Black owned and operated bank created for the express purpose of financially aiding African American communities. In 1970, he founded the Jackie Robinson Construction Company, which sought to provide housing for low-income people.

In 1972, just twenty-five years after the start of the “Great Experiment,” Jackie Robinson died following his decade long battle with diabetes. In 1973, with the assistance of Martin L. Edelman, Charles Williams and Franklin H. Williams, Mrs. Robinson honored her husband's memory by establishing The Jackie Robinson Foundation (JRF). As Robinson’s living legacy, JRF provides four-year scholarships and a host of support services, including career guidance, internship placement, and leadership development opportunities to talented college students with limited financial resources. To date, 1,700 college scholars from 45 states who have attended 260 colleges and universities have benefitted from JRF’s Scholars Program.
Jackie Robinson’s achievements have been honored by three Presidents: On March 26, 1984, President Ronald Reagan posthumously awarded him the Presidential Medal of Freedom; during the celebration of the 50th anniversary of Jackie Robinson's historic entry into baseball, President William J. Clinton led a ceremony with Major League Baseball to honor his number "42" in perpetuity; and on October 10, 2003, the Congressional Gold Medal, the nation's highest civilian award bestowed by Congress, was awarded posthumously to Jackie Robinson. President George W. Bush and the leadership of the United States Congress presented the award to Rachel Robinson during a ceremony held in the Capitol Rotunda on March 2, 2005.

Robinson garnered 264 of 336 points from the Baseball Writer’s Association and was named the 1949 National League’s Most Valuable Player. A dominant figure on the field that year, he played all 156 games, and was the National League’s batting and base stealing champion; was second in hits (203) runs batted in (124), doubles (38), triples (12); and third in runs scored (122). He would lead the Dodgers to the World Series where they lost to the Yankees in five games.

Jackie Robinson led the Brooklyn Dodgers to six World Series, with the team eventually winning the championship in 1955 against their cross-town rivals, the New York Yankees. Appearing in six games, Robinson went 4-for-22 with one double, one triple, one RBI, two walks and famously stole home base during game one of the series.

Five years after retiring from baseball Robinson was elected to Baseball’s Hall of Fame. He and his co-inductee Bob Feller were the first, first-ballot electees by the Baseball Writer’s Association since the inaugural class in 1936. Among his many accomplishments were his .311 batting average, 197 stolen bases, scoring more than 100 runs a year, six times and his six All Star game appearances.

On April 15, 1997, to mark the 50th anniversary of Jackie Robinson’s barrier breaking feat, MLB Commissioner Allan H. (Bud) Selig, Jr. joined by Rachel Robinson and President Bill Clinton, announced the retirement of Robinson’s number “42” throughout baseball in a nationally televised ceremony. Beginning in 2007, all MLB personnel wear the number “42” on April 15th to commemorate Robinson’s contributions to sport and society.